What does “no drinking or eating” mean to a computer

I saw a this signage while travelling on the circle line. 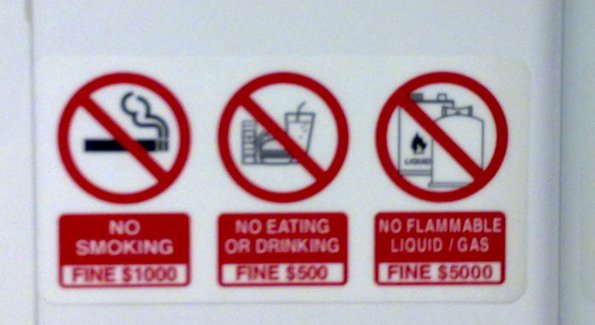 When I saw this sign, I was wondering if a computer is to decide who had violated the "no eating or drinking" rule, under which circumstance(s) will it identify a person as a offender?

To answer this question, let's create a simple computer algorithm that will search for offenders. To be more explicit to our computer, we can take "no eating or drinking" to mean "no eating or no drinking".

Converting the rule into codes for our computer, we get:

From the truth table, we can see that a person will not be identified as an offender when he/she is:

Our computer will only impose a fine people who are eating and drinking.

A better rule for our computer

Ideally, we would want our computer to impose fines on people who are either eating or drinking. Hence, we should use the rule "No eating and no drinking" as the condition in our if clause instead. We can verify our new rule with a truth table:

This time round, only those who are not eating and not drinking are spared from being fined by our computer.

Please do not eat and/or drink on trains

Compared to our dumb computer, humans are many times smarter. We all know that we should not eat and/or drink whenever we see similar prohibition signage. Since thirst is more unbearable than hunger, I feel that occasional sips from your water bottle should be ok.

How to create a file in C#