Setting up Go Git Service on a Ubuntu Server 15.10.3 image on my Raspberry Pi 3

My quest in searching for a suitable self hosted Git Service didn't stop at GitBucket. While GitBucket is easy to setup, running it on a Raspberry Pi 3 had not been ideal for me. If I had set it up on a more powerful computer / VM, I would have stuck with it.

To get a second opinion, I decided to give Go Git Service a try. This post documents my attempt in setting up Go Git Service on a Ubuntu 15.10.3 image on my Raspberry Pi 3. To make this post complete, the first eight steps are taken from previous posts.

The hardware that I used for this setup is as follows:

Getting the Ubuntu Server 15.10.3 image for my Raspberry Pi 3 onto the micro SD card

After I got the hardware that I needed, the next step was to get the Ubuntu Server 15.10.3 image for my Raspberry Pi 3. The awesome folks at Ubuntu Pi Flavour Maker had made a few variations of Ubuntu images available for me to download.

I downloaded a copy of the Ubuntu Server Standard 15.10.3 image onto my windows machine via torrent.

Once I got the .xz file, I used 7-zip to extract the .img file. I then used Win32 Disk Imager to write the .img file into the SanDisk microSD card via the SD card drive on my laptop.

I then attached my trusty mouse, keyboard, monitor, a RJ45 network cable from my DLink router and my old samsung charger to my Raspberry Pi 3 motherboard. After turning on the power, the login screen appears. The default username is 'ubuntu' and the password is 'ubuntu'.

I do not like a default username for my web server, even though it is not going to be used as the production server. Hence, I first added a new user via the command as follows:

I then went through the following Q and As:

After I had created my new user account, I proceeded to add it to the sudo group so that I was able to continue with installing the necessary software:

Once I had created my user, I proceeded to delete the default user.

I first restarted the server:

After the server booted up again, I logged in with my new user.

Once I had logged into the server, I typed the following in the terminal to delete the default user:

Resizing the file system of my Ubuntu Server 15.10.3 image to utilize the entire microSD card space on my Raspberry Pi 3

By default, the Ubuntu Server 15.10.3 image does not utilize the entire microSD card space on my Raspberry Pi 3.

Therefore, I proceeded on to resize the file system of my Ubuntu Server 15.10.3 image to utilize the entire microSD card space on my Raspberry Pi 3.

Upon setting up the Ubuntu 15.10.3 image running on my Raspberry Pi, I proceeded to install the MySQL database server for my Go Git Service.

To do so, I typed the following in the terminal:

This led to the screen to enter a password for the root user: 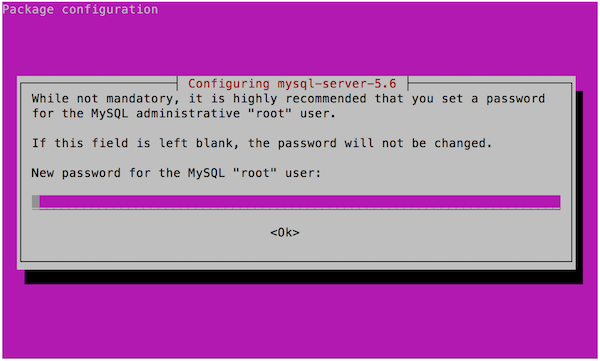 And the screen to repeat the password for the root user: 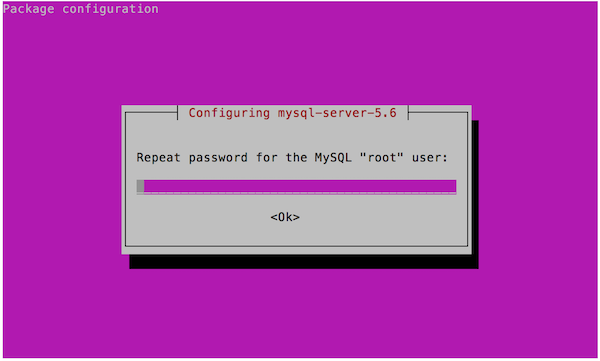 I verified my MySQL database installation by entering the command:

Which produced the following output:

With that, I got myself a MySQL database server and a root account for the database related tasks later on.

With the MySQL server running, the next item that I installed was Git. To do so, I ran the following command in terminal:

Downloading a copy of Go Git Service for Raspberry Pi 3

After I had installed Git, I proceeded to download a copy of Go Git Service onto my Raspberry Pi 3:

This would result in the binary source of Go Git Service 0.9.141 to be available in /opt/gogs.

This created an empty database instance named as gogs in my MySQL server.

I first got into the mysql shell:

Once inside the mysql shell, I ran the following commands:

These commands created a MySQL user with gogsuser as the username and password as the password. In addition, gogsuser has the rights to act on the gogs database instance.

Creating the system user that will run Go Git Service

Once the database related configurations had been completed, I went on to create a system user that will run Go Git Service:

This would create a system user with username gogs and Go Git Service as its descriptive name. In addition, this user cannot be used to login to Ubuntu Server

Making gogs the owner of /opt/gogs

I then changed the owner of /opt/gogs and its contents to gogs:

This would ensure that gogs had the appropriate privileges to act on the items inside the /opt/gogs folder.

Configuring Go Git Service to be run by systemctl

To do so, I first got into the /opt/gogs/scripts/systemd folder:

Inside this folder, there is a systemd unit file, gogs.service.

I first made a backup of this file:

I then opened up gogs.service with nano:

And changed the contents to resemble the following:

After saving changes made to gogs.service, I created the /home/gogs/systemdwd folder to serve as the working directory for Go Git Service:

After that, I enabled my Go Git Service so that it can be controlled by systemctl:

I then started my Go Git Service with the following command:

I then verified that Go Git Service runs successfully:

which the following output:

Once the system related configurations are done, it was time to proceed on with the installation process.

I supplied the following values as my initial configurations:

and clicked the Install Gogs button.

Once the installation steps were completed, I was shown the following screen in my browser: 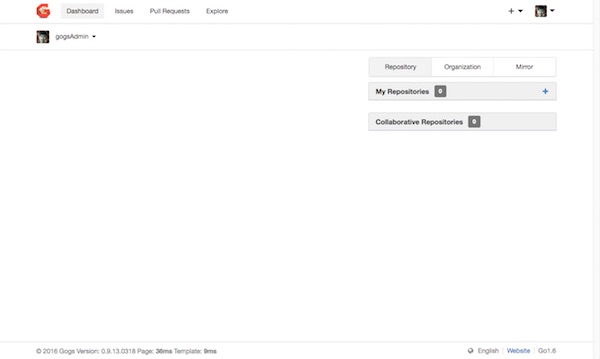 With that, I got a relatively responsive self hosted Git Service running on my Raspberry Pi 3.

Setting up GitBucket on Raspberry Pi 3 with an Ubuntu Server 15.10.3 image